Anticipatory Governance of Science and Technology Challenges to Democracy 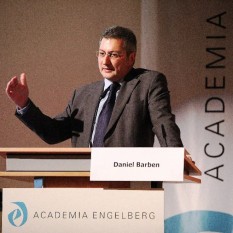 Professor Daniel Barben, RWTH Aachen University, outlined the manifold challenges new and emerging fields of science and technology (S&T) pose for those who are dealing with S&T in predominantly practical ways. But also those mostly concerned with analyzing the configuration of S&T in society are challenged. In his presentation, he spoke about some of the fundamental challenges associated with emerging technologies suggesting that anticipatory governance might help prepare us to cope with issues that are already known or might arise in the future. He criticized that science is not included in the political debates. He presented recent approaches to technology assessment (TA) and discussed the limits – including democratic deficits – inherent to such approaches in light of the broader societal and global challenges pertaining to the generation, regulation, and integration of emerging and future fields of science and technology.

He worked as a Research Fellow at the Social Science Research Center, Berlin (WZB) in the research area of Technology, Work and Environment from 1989 through 1998 and has been a member of the Center for Technology and Society (ZTG) at the Berlin University of Technology since 1999; served as Managing Director at the Institute for Science and Technology Studies (IWT) at Bielefeld University in 2004; worked as a Research Associate at the Robert M. La Follette School of Public Affairs and the Nanoscale Science and Engineering Center at the University of Wisconsin-Madison in 2005/06; and held (Visiting) Fellowships at the Institute for Advanced Studies on Science, Technology and Society at the University of Graz in 2000, at the Center for Global Change and Governance at Rutgers University in Newark, N.J. in 2000/01, and at the John F. Kennedy School of Government at Harvard University in Cambridge, Mass. in 2002.

He joined CSPO (Consortium for Science, Polica & outcomes) in fall 2006, where he is a Co-director of the Project on Global and Comparative Knowledges, among other things.