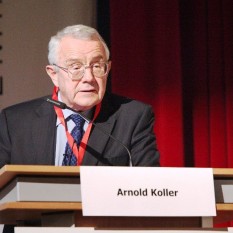 At the end of the 9th Dialogue on Science, former Federal Counsellor Arnold Koller spoke about federalism and democracy. He outlined the development of democracy in the past 50 years in Europe and confirmed a real renaissance. Afterwards, he discussed in detail the relation between democracy and federalism and asked the rhetorical question of whether federalism really leads to more and better democracy. He outlined different factors of “demos-enabling features” and “demos-constraining features”. Former Federal Counsellor Koller came to the conclusion that federalism can neither establish nor guarantee democracy. However, federalism is a successful and democratic way to solve conflicts in multicultural states, according to him. But it is not a panacea, as it is thought to be today, especially in conflict areas.

From 1971 until 1986, he was National Councilor. In 1980, he chaired the parliamentary group of the Christian Democratic People’s Party of Switzerland. In 1984/85, he became President of the National Council. At the same time, he also chaired the Cantonal Court of Appenzell Innerhoden from 1973 to 1986.
On the 10th of February 1986, he was elected Federal Councilor. From 1987 until 1989, he directed the Federal Military Department (EMD) and from 1989 until 1999, he was head of the Federal Department of Justice and Police (EJPD). He was president of the Federal Council in the years 1990 and 1997. On the 30th of April 1999, he handed over his position to his successor Ruth Metzler-Arnold.

The Forum of Federations deals with the contribution federalism can make to maintain and establish democratic societies and governments. Former Federal Councilor Arnold Koller is member of the Forum’s board. In 2002, he chaired the steering committee of the second International Federalism Conference in St. Gallen. Three years later, he was elected president of the board. Arnold Koller became Fellow of the Forum which is the highest distinction.