Democratic Representation in an Internationalized and Globalized World 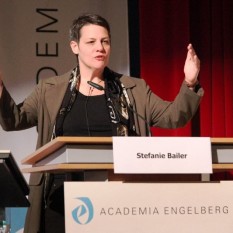 Professor Stefanie Bailer from ETH Zurich reported that in globalized political order, there are debates of whether the end of parliamentarism has come or whether it is time to declare a postparliamentarist period. She explained the problems of free votes. Afterwards, she analysed voting processes for complex issues and factors which explain these decisions. She came to the conclusion that modern democracies face two types of challenges. On the one hand, national parliamentarians lost competencies to international organizations with increasing power such as the European Union. On the other hand, the representatives are faced with more intricate policy problems due to more complex societies (e.g. legislation on genetically modified mechanisms). For the Swiss militia system, she mentioned the following risk: “The more complex the issues, the more successful lobbyists will be!”

She was born in Schondorf (Germany) in 1973 and graduated from secondary school in Hohenbaden in 1992.

From 1992 to 1998, she studied Administrative Sciences with a major in International Relations at the Universities of Constance and Manchester Metropolitan (UK).

From 1998 to 1999, she was a scholarship holder at the Robert-Bosch-Stiftungskolleg in the Ukraine.

From 1999 to 2004, she wrote her dissertation on the power and success of the Council of Ministers in EU negotiations at the Universities of Constance, Groningen and Michigan.

Since 2002, Stefanie Bailer works at the University of Zurich, Institute for Political Science.

Since 2007, lecturer for Political Science at the University of Lucerne.

Since 2009, professor for Global Governance at ETH Zurich.