Old Sciences for a new type of Progress? 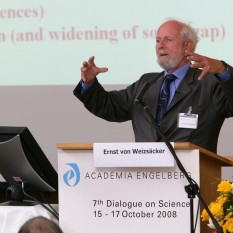 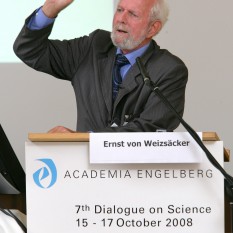 “It is actually incredible that those who are responsible have not reacted before. Everybody knew that yearly growth rates of thirty percent are impossible in the long run. But nobody dared to question this development. We consciously ran into the crisis” mentioned Professor Ernst von Weizsäcker regarding the current financial crisis. He called to mind the fact that there are also other problems that have to be tackled urgently such as climate change, overpopulation, new pandemics, bio nanotechnologies (and their consequences) as well as dealing with new super powers such as India and China. He is especially worried about the unscrupulous manner of how Americans use fossil energies. “The government deliberately set low gas prices in the 1990’s which considerably increased mobility. Afterwards, large areas of land, far away from the cities, were built on. The consequence of this was: The commuting distances for the people, all of a sudden, doubled. And this effect led to the modern dinosaurs, the so-called SUVs. In South America, bio ethanol is produced with corn or soya in order to protect the continent’s natural resources. Due to this increase in demand, corn prices have doubled in Mexico. Once again, the poorest population segments are the losers of this development.”

Ernst Ulrich von Weizsäcker, born 1939 in Zurich, gained his university entrance examination in 1958 from the Max-Planck grammar school in Göttingen and gained his degree in Physics in Hamburg in 1965. In 1969 obtained a doctorate in Biology in Freiburg. From 1969 to 1972 he was Scientific Adviser to the Evangelische Studiengemeinschaft in Heidelberg. from 1972 to 1975 he was ordinary Professor of Biology at the University of Essen and from 1975 to 1980 President of the University/GHS Kassel.