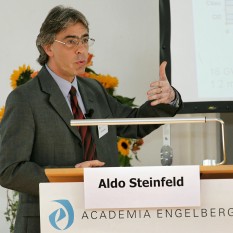 Aldo Steinfeld has been Associate Professor of Renewable Energy Carriers at the ETH-Zurich since 2004. He further leads the Solar Technology Laboratory at the Paul Scherrer Institute.

He was born 1960 in Montevideo, Uruguay. He received his B.Sc. in Aeronautical Engineering from the Technion in 1983, his M.Sc. from Tel Aviv University in 1986, and his Ph.D. in Mechanical Engineering from the University of Minnesota in 1989. Following his doctoral graduation, he was Research Fellow at the Energy Research Center of the Weizmann Institute of Science. In 1991 he joined the Paul Scherrer Institute as Head of the Solar Process Technology Group and, in 2005, was appointed Head of the Solar Technology Laboratory.

Prof. Steinfeld is the Editor of the ASME – Journal of Solar Energy Engineering. He served as the Operating Agent of the International Energy Agency’s SolarPACES Program, as the Chair of the ASME Solar Chemistry Committee, and as Associate Editor of Energy – The International Journal (Elsevier Science). He has authored over 80 research articles in scientific journals, and chapters in the Encyclopedia of Physical Science and Technology and the Encyclopedia of Energy.