Clashes of the Absolutes? Coping with moral Conflicts in Genopolitics 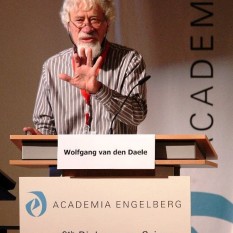 In his presentation, Professor Wolfgang van den Daele from the Social Science Research Center in Berlin explored the question of whether deliberative democracy is suitable to forestall the escalation of moral conflicts. He explained how irreconcilable moral dispute over bioethical problems was dealt with deliberatively in the setting of the German National Ethics Council (NER). The dispute in the NER established what may be called “rational dissent”. The members of the NER could not, despite good will, resolve the contested issues through arguments that relied on moral reasons which they all accepted. In his presentation, he expressed his doubts about the fact that similar achievements can be expected from deliberations in other institutional settings. There may be some hope if it can be clearly conveyed to the minority and the distribution of regulatory power and interest is decided through voting (or bargaining, for that matter). If it were not about defeat or victory of the competing moral values. He postulated that parties of bitter moral conflict have to show tolerant and respectful behaviour during deliberations – as long as deliberations last.

1958-1963 Attended the Universities of Hamburg, Tübingen, and Munich,
Federal Republic of Germany; studied jurisprudence and philosophy;
1968 Received Dr. jur.
1970-1980 Researcher at the ¬Max Planck Institute for the Research of Living Conditions
in the Scientific-Technical World, Starnberg, Germany. Did research in the
social history of science, and on the theory of scientific development and
political
control of science and technology.
1981-1982 Visiting professor, Department of Scientific Development, University of
Amsterdam, Netherlands.
1982-1989 Researcher in the Department of Science Research, University of Bielefeld,
Germany.
1988 Professorship in Science Research.

Carried out work on the ethics of research, and the relationship of scientific-technical development and changing values in society; did research on technology assessment in the field of modern biology.

Professor of Sociology at the Free University of Berlin, Germany

1989 till present Director of the research unit “Standard-setting and Environment”, Wissenschaftszentrum Berlin, Germany.