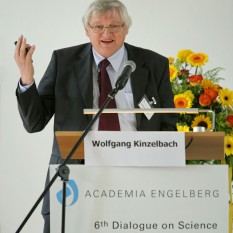 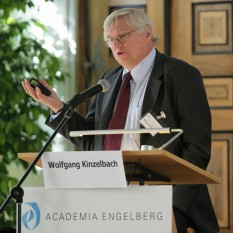 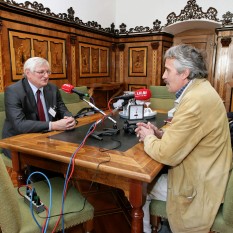 Prof. Wolfgang Kinzelbach, Institute of Environmental Engineering, ETH Zurich, presents challenges of sustainable water management as facts and issues. 30 percent of surface water is replenished per year. But only 3000 km3 out of 10 million km3 of ground water are replenished per year. 50,000 km3 out of 110,000 km3 of precipitation water vaporize. 18,000 km3 of water are used in farming. Only 4000 km3 are directly consumed by mankind and only a small fraction of it as drinking water. While irrigation is a quantity issue, drinking water is a quality issue. According to the UN, 407 million people suffered water shortage in the year 2000. By the year 2025, 3 billion people will be affected. In European households, 150 litres of water are used daily per person; in Kenya, it is 2 litres. Water shortage exists especially in the Western USA, Mexico, North Africa and Asia, namely in Northern China. Climate change causes increasing problems mainly in South Africa, Australia and the Mediterranean region. In Europe, a cubic meter of water for agricultural irrigation costs €0.01; for drinking water, €2 have to be paid. 70% of available fresh water is used for irrigated agricultural production that yields twice as much productivity as cultivation that only receives natural precipitation. In developing countries, the proximity to latrines as well as technical and administrative problems are the main challenges. Generally, drinking water costs more in those regions than in the West. Prof. Kinzelbach estimates that 300 billion USD investments worldwide, (half of the US defence budget), could solve drinking water problems. Maintenance and sustainability are the real challenges. In 2050, mankind will face big challenges. According to the speaker, the world’s population will grow by 3 billion and the demand for irrigation will increase by 60 %. Typical problems regarding drinking water are: non-sustainable use of water resources, fragile ecosystems, unfair allocation, escalating costs, upstream-downstream conflicts and an unfortunate proportion of water resources to population, such as in Northern China, Tunisia and South Arabia. Disappearing water resources are common. Concerning depletion of ground water resources, a quarter of withdrawals are not replenishable. This affects 40 % of irrigation projects. Rivers dry up with pronounced effects. Take the Aral Sea as an example. Wetlands are also drained. 50% of such areas have disappeared since 1900. Soil salination affects almost a third of irrigated land. Contaminated soil needs time to recover, but investment and political will are necessary (Swiss lakes, the Rhine and the Thames are examples of this). Action scenarios are available, such as: increased efficiency of irrigation and rain water use, migration to less water intensive food, adaptation of economic activities, water import/trade/transfer, desalination, resettlements, birth control, accountability and strong institutions, sustainability, technical and socio-economic obstacles and price adjustments. Prof. Kinzelbach ends his presentation with a question regarding a difficult choice: Swampland or a hungry population? Which has to disappear? Questions from the audience: Does renewable fuel production exist? Current practices are careless; corn becomes scarce and far too expensive. China declared that they would not use food for fuel production. Are our bodies of water too clean for fish production? Can we deprive developing countries of the right to mobility (increased demand for fuel)?

Wolfgang Kinzelbach has been full Professor of Hydromechanics at the ETH Zurich since January 1, 1996.

His research concentrates on flow and transport processes in the environment with practical application in water resources management, pollution control, remediation and nuclear waste isolation. His current focus is on sustainable water management especially in arid and semi-arid regions. He was awarded the Ehrensenator Huber Prize by the University of Karlsruhe, the European “Förderpreis” of the Körber Foundation, the Softwareprize of the Federal Minister of Research and the Henry Darcy medal of the European Geophysical Society. He is a member of the Research Commission of ETH and the Leuenberger Commission on NEAT tunnels and a scientific counsellor to BRGM, GSF and PSI.

The focus of the Foundation is the promotion of organizations in the areas of culture and arts, architecture, design, music, sports, education, and science. It has been a partner of Academia Engelberg Foundation since 2014.