Hunger and Abundance – the divided World of Nutrition 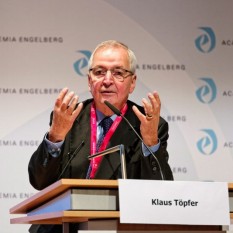 Prof. Klaus Töpfer, former German Environment Minister, Institute of Advanced Sustainability in Potsdam, provided an alarming overview of the rapid global soil erosion: „We must rethink how we approach food – food has degenerated into a lifestyle object. This abundance of food, combined with massive food waste in the industrialized countries, is leading to an increased division between rich and poor among the world population.“

Production systems and the resulting excess production in the industrialized countries are closely connected to the pressure on food security and livelihoods in other parts of the world. At the same time, the loss of productive land is increasing worldwide due to mining and land claims for settlements and infrastructure. This leads to substantial reductions in food production capacities. Each year, we lose approximately 24 billion tons of fertile soil due to soil degradation. This land loss could lead to production difficulties and rising food prices, he warned the participants of Academia Engelberg Foundation’s 13th Dialogue on Science.

Learn more about this subject in the video of Klaus Töpfer’s presentation.

Klaus Töpfer (born 29 July 1938 in Waldenburg, Germany) is a German politician (CDU) and environmental politics expert. From 1998 to 2006 he was executive director of the United Nations Environment Programme (UNEP).

Töpfer studied economics in Mainz, Frankfurt and Münster. In 1968 he earned his doctorate at the University of Münster. After functioning as government official, professor and adviser on development politics he became minister for the Environment and Health in the regional government of Rhineland-Palatinate in 1985. In 1987 Töpfer became German Federal Minister for the Environment, Nature Conservation and Nuclear Safety under Chancellor Helmut Kohl. From 1994 to 1998 he served as Federal Minister for Regional Planning, Civil Engineering and Urban Development. He was member of the Bundestag from 1990 to 1998 and member of the Steering Committee of the CDU from 1992 to 1998.

In 2009 Töpfer was appointed founding director of the Institute for Advanced Sustainability Studies (IASS) which will perform research between climate problems and sustainable economics. This institute will be located at Potsdam, Germany.

He is currently a member of the Advisory Board of the German Foundation for World Population.